A sweet darling 11 year old local girl has been working hard
to collect pennies for a 'Free the Children'
$25. will buy a person water for Life. 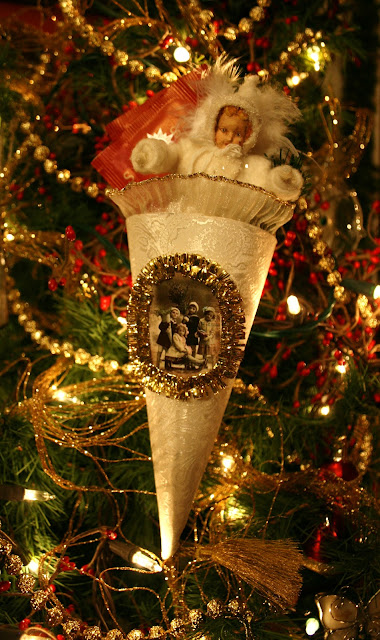 Tomorrow night, at our WINGS meeting,
I'm selling tickets on these
Victorian cones
with the money going to Keara. 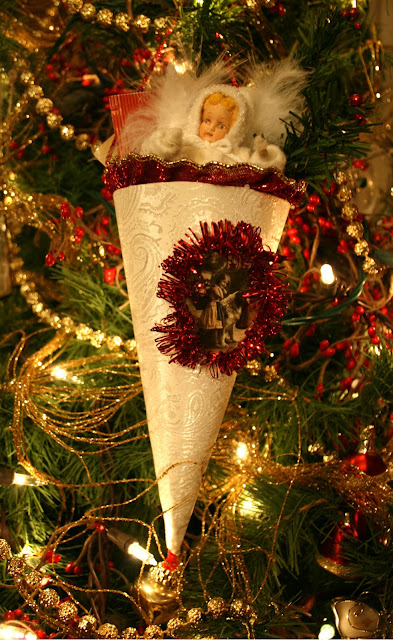 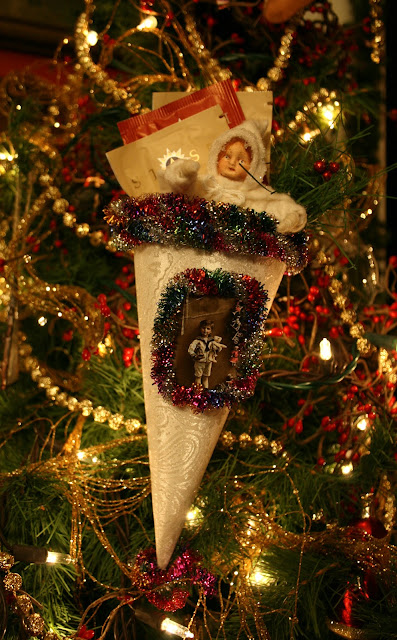 Posted by EvScott at 6:50 PM No comments:

Back in the Saddle

After not listing anything on Ebay for two years,
I had to re-learn a few things.
But ... I got a dozen things up there.
A little late for the season,
but early for next!

These are the cards enclosed with each creation
with a certicate of Authenticity inside. 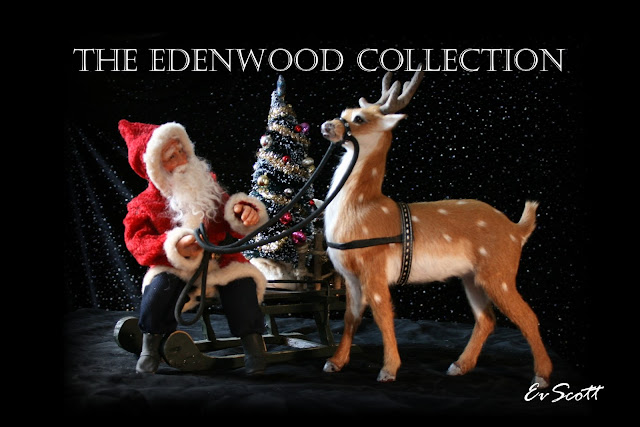 This fella is moving to Illinois to be with a long time
collector & now dear friend - who has more
of my work than anyone in the world. 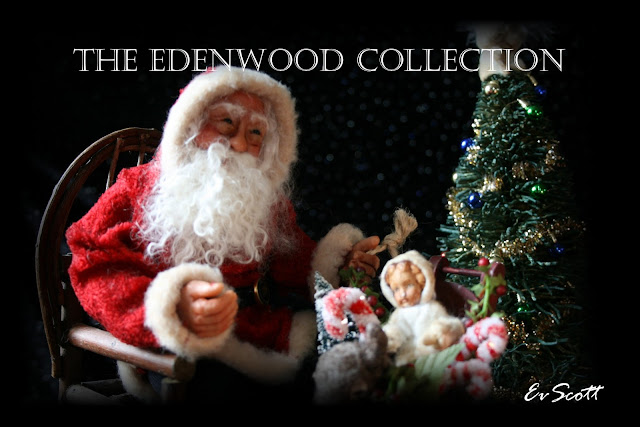 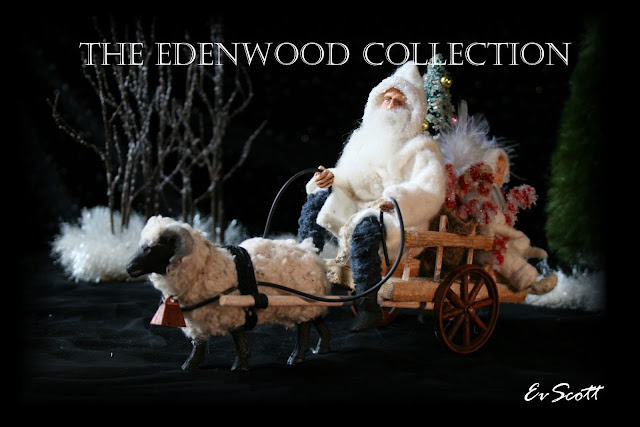 This little sheep is on his way to Kentucky. 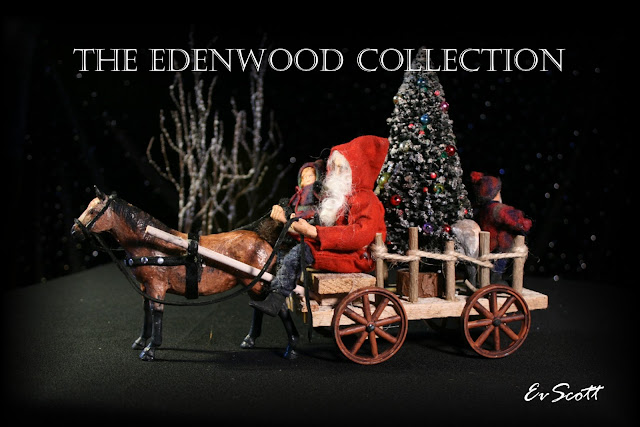 And the horse is heading to Massachusetts. 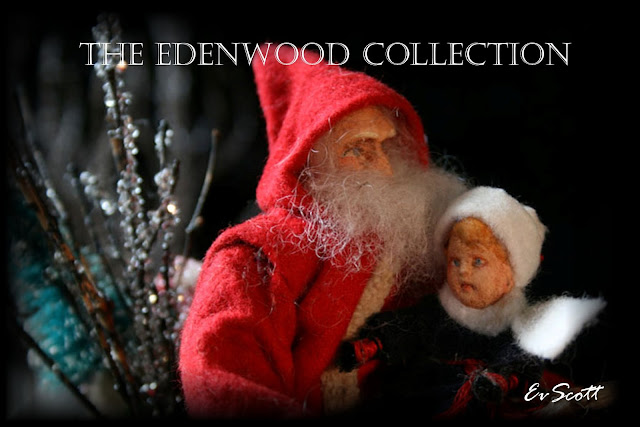 This little set is going somewhere in the USA that is
a secret right now as it's going to
be a gift. 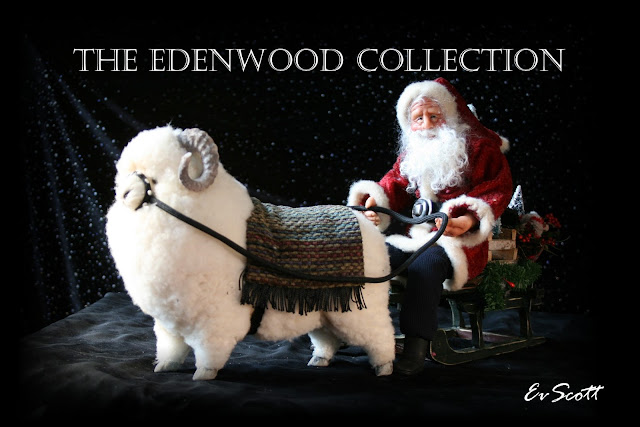 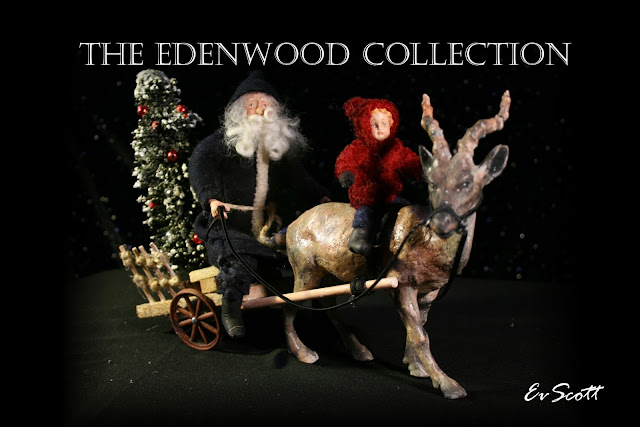 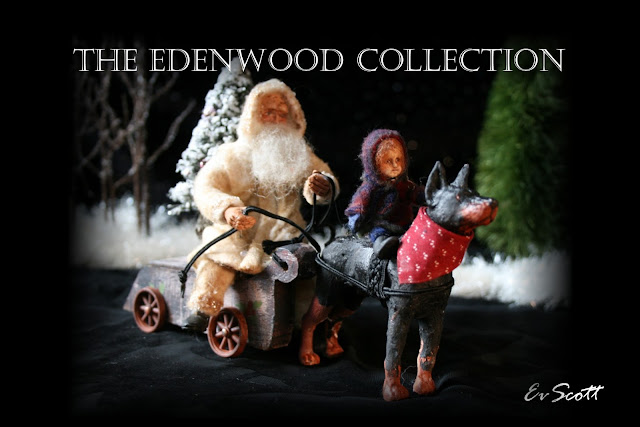 This pup gets to spend his life in Florida! 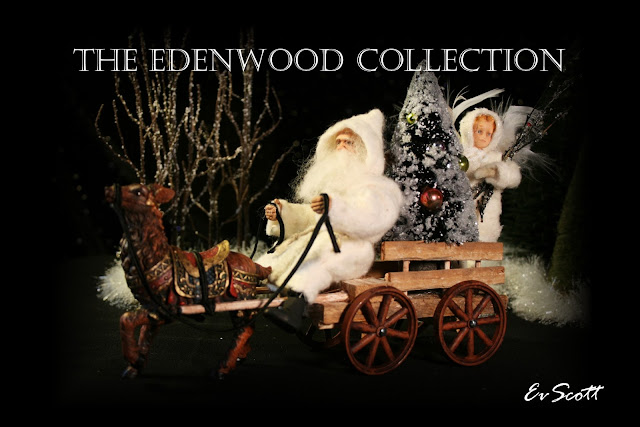 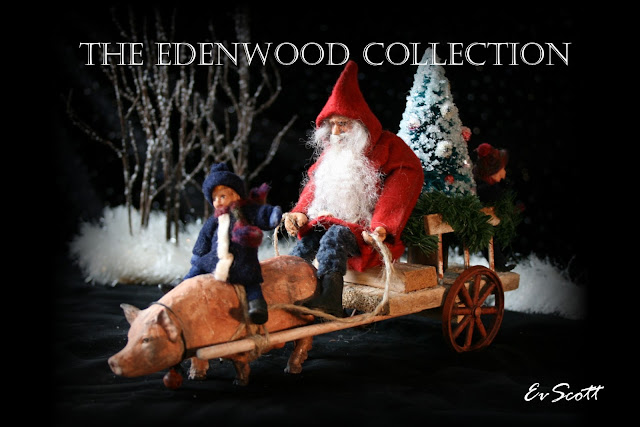 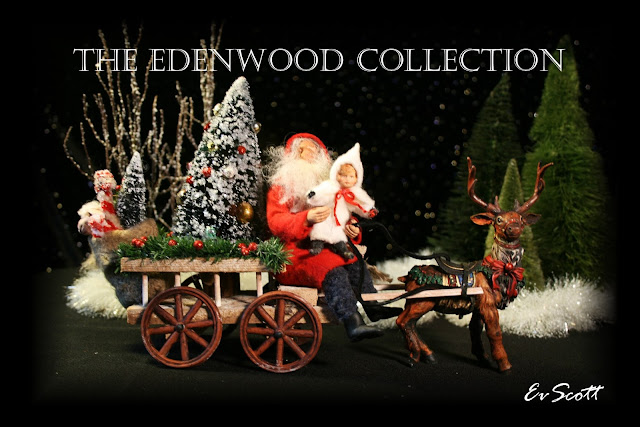 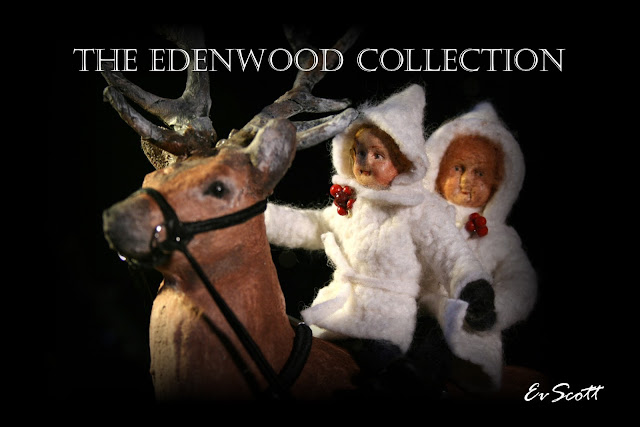 Oh my gosh, I've lost my edge.
I used to work 18 hours at a sitting.
I used to stay up til 2 am and then be up again at 6.
I used to put in my mind that I needed to have "x" number of something
and not give up til I accomplished it.
There was no compromise in that.
I was driven. 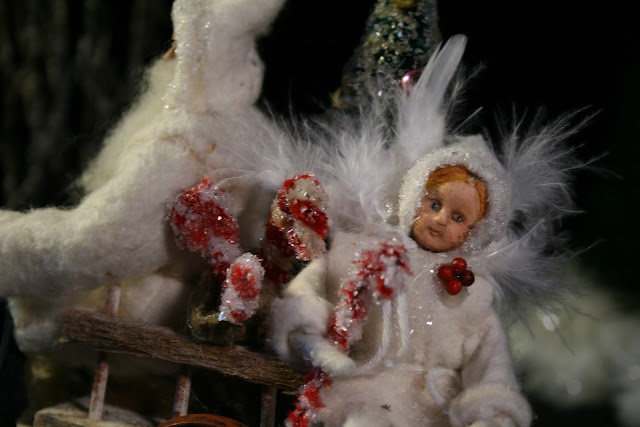 And I was fairly productive.
When I think about the sheer number of things that I have created over the years,
I get tired. 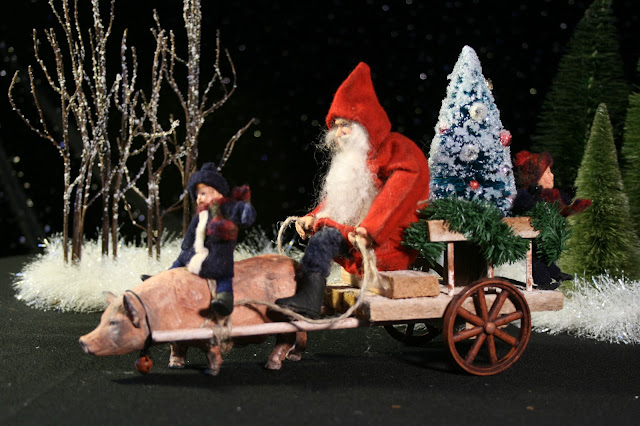 In 1998 when I started sculpting,
I took orders in June for over 170 pieces that had to be done by October.
Craziness.
The following year, it was 260 orders.
Yes. Insane. 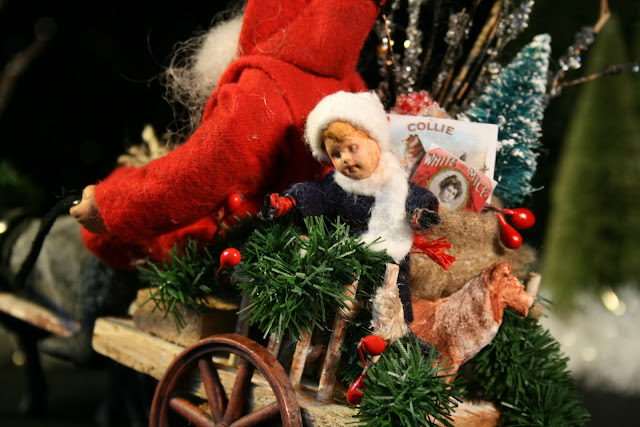 At the time, I also had 4 children at home, an elderly and ailing father
and was involved in a number of organizations.
And yet I produced.
Lots. 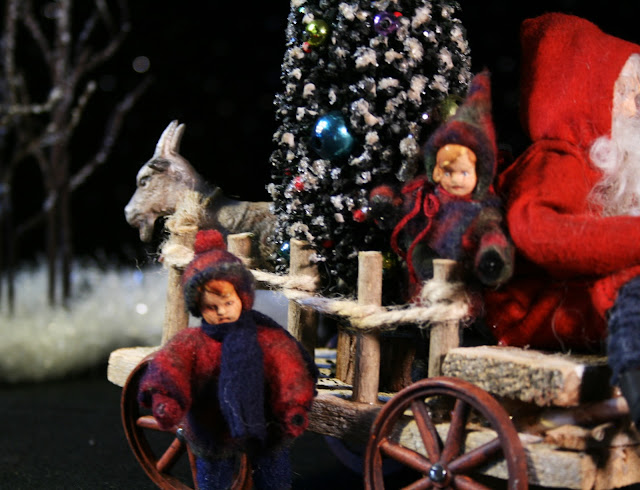 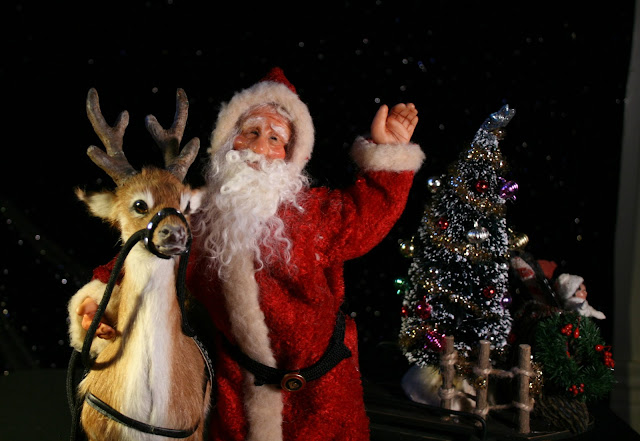 I jog rather than sprint.
Whether that is the aging process ...
physically or mentally
I don't know.
But it's okay.
It's a very peaceful spot to be. 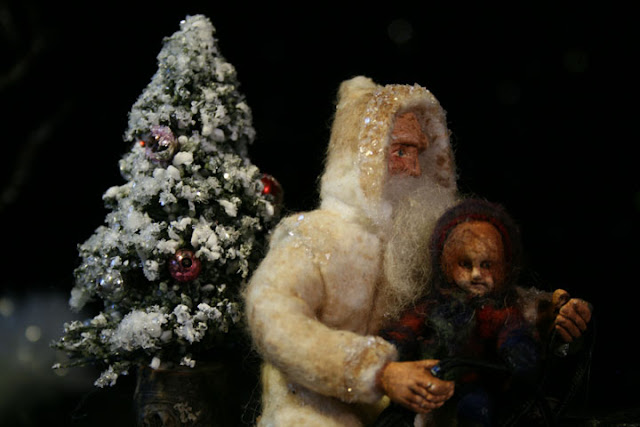 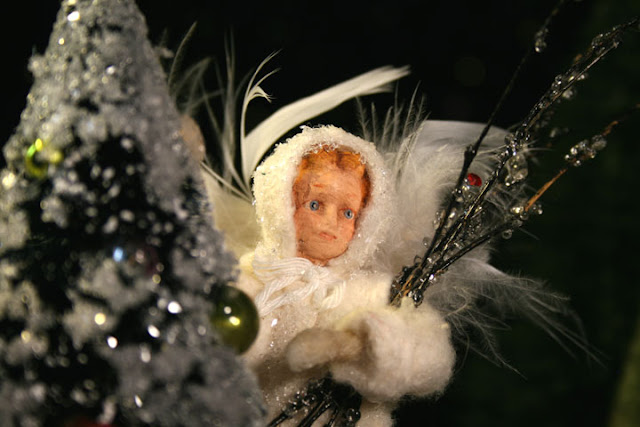 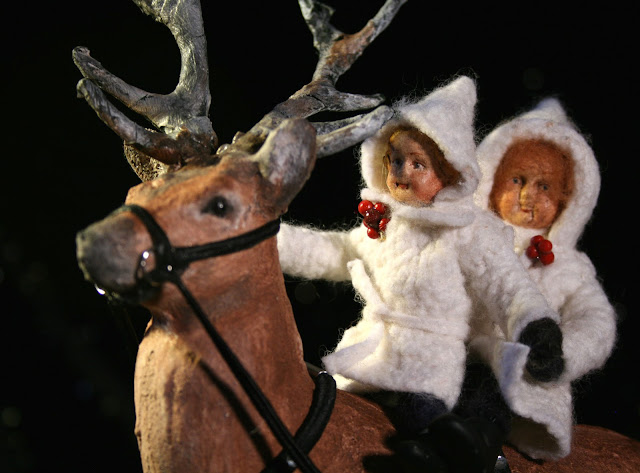 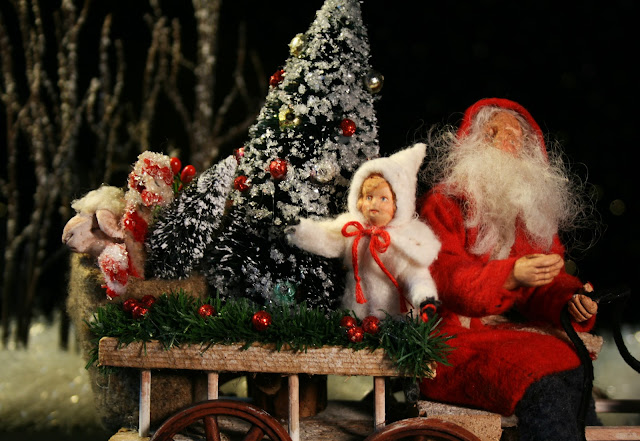 Yes. Tomorrow.
Posted by EvScott at 5:14 PM No comments:

I have not been a CreatEv Soul for a long time. Too long.
A year and two months since I posted here. Two years since I did my Christmas line.
Getting back to the studio was long overdue.
And getting back in the habit of posting here is too.
So here I go again ... 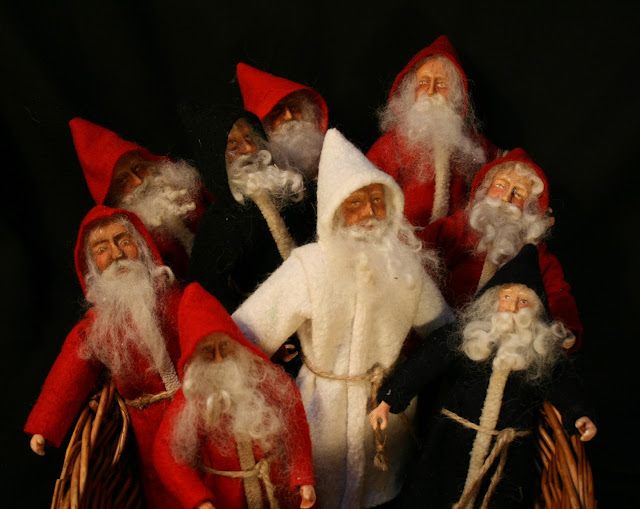 I wonder where these Santas will live.
They're anxious to get on their way.

And the Angels. I wonder where they will move to.
I love making these little Snow Angels.

Actually, I love making everything!
I've missed it. 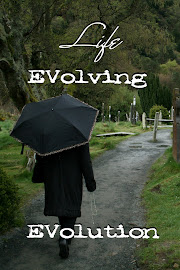 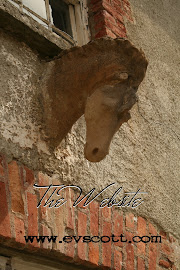 Anyone becoming a FOLLOWER by January 31st, 2011 is entered in a draw for a OOAK creation.

EvScott
I live, for most of the year,in a wonderful farm community in Southwestern Ontario, just minutes from the famous Festival City - Stratford. When I'm not here, I'm at our home by the sea, in beautiful Newfoundland. I am PASSIONATE about my family, my friends, my critters, my art, LIFE in general. I'm going in too many directions at once - always have been, always will be. It's who I am.